The latest line up of cars have been announced for the 2018 London Concours event, taking place at the Honourable Artillery Company’s London headquarters this June. Ran by the same company who organise the prestigious Concours of Elegance, this event will bring a collection of the world’s best and rarest cars directly into the capital.

Some of the worlds most stunning supercars will be on display, including a 1969 Lamborghini Miura S and the legendary McLaren F1, which held the production car top speed record of 240mph until it was topped by the Bugatti Veyron in 2005. Also on show will be a Ferrari F50 and an Aston Martin One-77, which featured the most powerful naturally-aspirated production car engine on record, offering 750bhp from the 7.3 litre V12.

Another stand out car on the roster is a 1959 Fiat Abarth 750GT ‘Double Bubble’ Zagato. This well-travelled example originally went to America for a racing career, before heading back to Europe. It then went to Australia to be restored and then came back to Europe for work to be carried out on the engine and gearbox. It is believed there are only 100 surviving versions of this car left in the world.

The London Concours takes place on the 7th-8th June in the City of London at the Honourable Artillery Company’s headquarters. 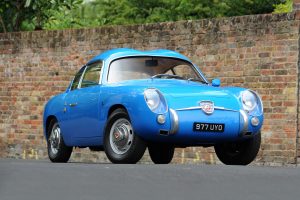