The Best of British Cars

We’re due a long weekend this week in celebration of the Queen’s Platinum Jubilee to commemorate her 70 years of service, and for being the first ever British Monarch to have a Platinum Jubilee!

The parade will be held on Thursday 2nd June at 11am trooped by the 1st Battalion, Irish guards, and over 1,200 soldiers from the Household Division accompanied by hundreds of horses. A countrywide beacon chain, historically implemented for communication purposes, is also going to be lit in sequence to bring the unity of towns, counties and even as far as British territories overseas.

In honour of this incredible, historic milestone the team here at Oracle have had the pleasure in exploring the best of British marques and cars throughout the reign of Queen Elizabeth II and wanted to share these with you below. 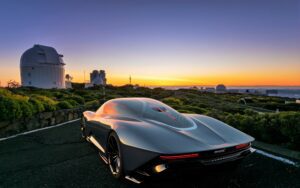 The McLaren Speedtail, 4th edition in the ‘McLaren Ultimate Series,’ is an extraordinary hyper car which was revealed to the public eye on 26th October 2018. The beautiful dihedral doors aren’t the only thing that makes it so unique. This car has not just two, but three passenger seats fitted into the chassis. This is something that hasn’t been seen in a supercar since the iconic Mclaren F1.

The Speedtail not only looks amazing, but it is also capable of daring speeds as high as 250 mph and can accelerate from 0-60mph in as little as 2.9 seconds, with a kick from the 1,035 bhp. There are also some outstanding technological advancements incorporated within this car, such as the electrochromic glass that can darken in tint at the push of a button to eradicate the need for sunglasses. A rather unusual feature includes the fact that there are no wing mirrors! Instead, this vehicle is mounted with HD cameras which are installed on the front guards and appear when the ignition is started. The Speedtail is the only car in production with a flexible rear spoiler where the painted carbon body actually bends at speed providing the downforce required to stabilise such a fast car. 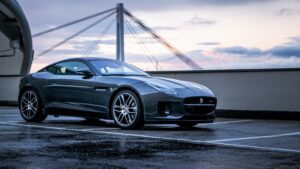 Jaguar really is an incredible marque, especially when it comes to the renowned F-Type. It has been argued that this is one of few sports cars that can rival the Porsche 911. This rapid and luxurious two-seater is capable of providing the best of both worlds… an astounding V8 noise when the throttle is put into action, but also offers a smooth drive at steady speeds. It still has a very modernised look after having its last facelift in December 2019, and can be manufactured as a coupé or convertible. All in all, this is the perfect car that captures elements of sport, style, and optimum comfort.

Not only that, but there is a 250 limited production run of the Very Special Project 7 developed by special vehicle operations to commemorate Jaguar’s 7 Le Mans victories, reminding the world that Jaguar are a force to be reckoned with in motorsport. 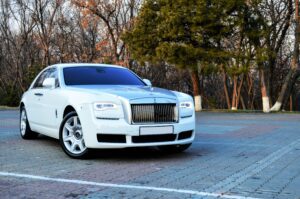 An obvious model, in the context of royalty vehicles of course is the elegant Rolls Royce. In this case we’re looking at the prestigious Rolls Royce Ghost. Inspired by the Silver Ghost produced over 100 years ago in 1906, this Rolls Royce has even carried on the name to preserve the legacy of its predecessor, and was even named “the best car in the world” by Autocar in 1907.

When being manufactured in 2011, the Ghost was built to be a slightly smaller, more realistic car than the Phantom by being positioned in a lower price category on the market, but as a Rolls Royce this model is still an architectural piece of luxury. BMW have also given insight to the future of Rolls Royce that their cars will continue to be produced with combustion engines until 2030 when the brand will turn to electric models exclusively, just in time to obey government regulation banning the purchase and sale of gasoline drinking vehicles. 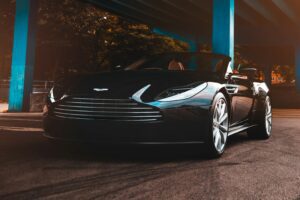 Despite driving a Rolls Royce in the books, the James Bond series has consistently provided a monumental cinematic experience captivating the essence of luxury in Aston Martin cars throughout successful product placements in the movies. The CEO at the time (Andy Palmer) even personally checked the first 1,000 DB11’s himself back in 2016 to ensure the cars were up to standard in terms of quality.

This model comprises of a 4.0-Litre Mercedes-AMG twin-turbocharged V8 engine, enabling a top speed of 187 to 208.2 mph and a rapid 0-60 time of just 3.6 seconds. It also drives with a fantastic degree of comfort and control, as the DB11 won the Golden Steering Wheel Award in 2017 by Axel Springer after being voted as the “Most Beautiful Car.”

We’d also like to shed some light on the V12 as it is a fantastic upgrade. This version contains a 5.2 Twin Turbo V12 providing an astounding 600 BHP. The car also features an “aero blade” taking in air by the rear window and forcing it out at the rear of the car creating a virtual spoiler, giving great downforce with zero drag. 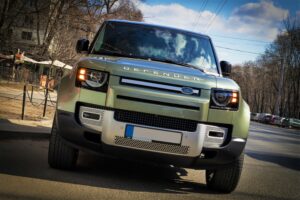 The Defender can take on and thrive in the harshest of conditions unlike any other 4×4 SUV. The latest version released in 2019 still retains the characteristics and shape from it’s predecessors such as the slender curves around the bodywork, a spare wheel mounted externally at the rear and all in all; the ability to clearly see and know where the frame starts and ends to effortlessly navigate around obstacles.

The newest Defender is also targeted at drivers looking to splash out with a higher budget as the model takes more steps into the world of luxury SUVs. It has a kerb weight of 2,100 kg, but is powered by a horsepower up to 395. This smart-looking vehicle, packed with power is a fantastic choice for drivers looking for seamless performance in tough conditions. 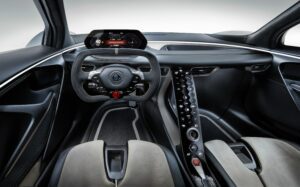 The Lotus Evija is an incredible British electric supercar, first produced in 2020 and really captivates what it takes to be a car of the future in appearance and design with its aircraft-inspired interior and controls with a bar full of buttons and a rectangular steering wheel. The two-door coupé comes with a 70 kWh lithium-ion battery capable of travelling 250 miles range per full charge… not to mention a staggering horsepower of 2000. Very impressive for Lotus’ very first electric car, we’re thrilled to see what the future holds in this domain, not just for Lotus, but other British and international electric supercars manufacturers! 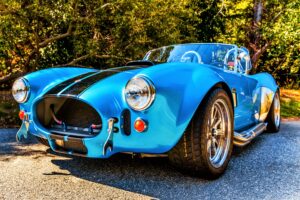 The AC Cobra, sold in the US as the Shelby Cobra and UK as AC Shelby Cobra, has been on the market since 1962. The bodywork consists of a hand-crafted frame and aluminium panels created with English wheeling machines. Since the engines used in Cobras were devised before the Second World War they were perceived to be outdated in the public eye in the 60s. This meant that AC were in demand for another supplier for the beating heart of their cars. The Cobra was also originally based on the AC ACE, and Carroll Shelby wanted a small, light Sports car to base his racing cars on. AC first reached out to Chevrolet, but their plea was declined as Chevrolet couldn’t risk jeopardising the Corvette with increased competition. However, success was found with Ford as they wished to engage in competition with Corvette. Thus, Ford worked with AC’s Cobra to upgrade the Cobra’s anatomy so it could rival Chevrolet’s beloved Corvette. Alas, the Cobra was fitted with the Ford small-block Windsor V8 engine. 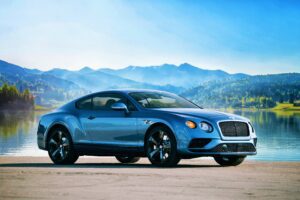 Since 2003 the incredible Bentley Continental GT has been on the market, which was also the very first car to be released by Bentley after being acquired by Volkswagen in 1998. The biggest upgrade to the Continental GT occurred in 2018 with two engines to choose from, and just last year the Speed model was released putting even more power in the pedal. This version can be differentiated from other GTs with the limited edition ‘Speed’ badge on the front fender and interior of the car. To put into perspective of how significant this model upgrade is, the Speed GT has the same 0-62 mph time as the Lamborghini Huracan. This luxury British car really is what it says on the metal.

These are just some of the sensational cars that have been manufactured with British hands throughout the reign of Queen Elizabeth II. We are very excited to see what other sensational motors will be produced during her majesty’s time on the throne. Even more so, we cannot wait to put more of our customers in the driving seats of these vehicles.

Thinking about driving the Best of British? Give your dedicated Account Manager a call on 0800 012 6666, or simply click here for our quick online quote form and we’ll be in touch soon.

View More
Car News 28 Jun 2022
Goodwood Festival of Speed 2022 Roundup
Last weekend brought another spectacular event at the Goodwood Festival of Speed for their annual car show. This year saw…
Read More
Car News 14 Jun 2022
What Are The Financial & Performance Benefits With Electric Vehicles?
As the government aim to make the UK carbon neutral by 2050 in a bid to combat climate change, with…
Read More
Car News 6 Jun 2022
The History of the Rolls Royce Phantom
The luxury, British Rolls Royce automotive brand is jam-packed full of exciting history. After originally existing as engine suppliers, Henry…
Read More
Car News 3 May 2022
The ultimate Porsche buying guide
The German brand, Porsche, can trace its engineering influences as far as the early 1900s with the Type 356 being…
Read More

Car News 22 Mar 2022
Car Market Update – Q1 2022
It’s hard to believe we are already a quarter of the way through the year. 2022 has started with a…
Read More
Car News 25 Nov 2021
Market Update – November 2021
Welcome to our Market Update - November 2021. Christmas is only a month away and there’s still lots going on…
Read More
Ready to know more?
Let Us Put You in the Driving Seat
Whether you’re looking to arrange the finance on your next car, refinance an existing agreement or release equity from your current vehicle, your dedicated Account Manager will find a funding solution that’s perfectly tailored to your needs.
Get a Quote
or
Contact Us
CALL US GET A QUOTE