Forget Christmas adverts! Check out our top 8 car ads of all time

It’s that time of year again! This morning, the John Lewis Christmas advert hit our screens once more. Just in case you’re not quite ready to get into the Christmas Adverts spirit, we asked the Oracle Team about the adverts they’ll never forget. From innovative concepts to nostalgic classics, here are some of our favourite car-related adverts from over the years.

In a bid to show off their Magic Body Control, a feature exclusive to the S-class, Mercedes-Benz demonstrated automatic suspension with a chicken. Yes, it’s a bit mad – but it worked. The advert skyrocketed online with over 220k Facebook shares in less than four days.

“Old luxury has been put on hold. Audi and the R8 are here.”

Consider that a threat. The 2008 Audi advert pays homage to the classic Francis Ford Coppola blockbuster, The Godfather. The manufacturer recreates the iconic scene where Mr Waltz wakes up in his lavish mansion with a horse’s head in his bed. But, in this case – the rich man wakes to his old car bumper and grill at his feet as an R8 flees the scene.

The Discovery can literally take you anywhere, and that’s exactly what Land Rover want you to know. The slightly humorous and completely charming ad follows a couple “drop off their dirt-covered adventure clothes to the dry-cleaner to the bemusement of the owner until he sees their Discovery 4 outside”. 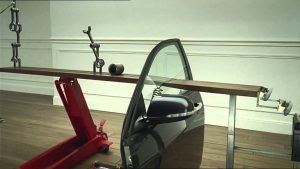 This iconic ad takes a different approach to adverts. The one-shot advert shows approximately 140 working pieces of the car! According to The Guardian, this was “one of the century’s most creative commercials” and was filmed in only 60 takes over three days.

The heart-warming campaign won “the best use of social media by an auto brand” at the Shorty Awards 2017 and we can see why. Amid a vehicle automation debate, the producers of the advert, SapientRazorfish explained their concept. “Once the most feared animals on the planet, social media made him a laughingstock – and the perfect protagonist for our story”.

The ad follows actor, Simon Paisley Day on a journey of Honda vehicles to support their ‘Power of Dreams’ mantra. According to AutoTrader,  it took almost £5 million to make. It’s no secret that Honda are miracle-makers in the advertising industry. But this particular one was voted top eight by our Account Manager, David for being “so memorable and really touching”.

The Volkswagen advert follows a boy trying to “emulate the powers of Darth Vader” by bringing a VW Passat to life (with the help of his father’s keys). The ad has since been described by AdWeek as the “dark lord of Super Bowl ads”.

“If only everything in life was as reliable as a Volkswagen”

Who remembers this one? The advert shows Paula Hamilton gradually discard her luxury belongings. Her pearls are thrown in the bin, and her fur coat is left in the road as she makes her way to her trusty Volkswagen Golf. The fur coat didn’t go to waste though – a member of the public wrote to Volkswagen asking if she could keep the coat, and the manufacturer happily obliged, which only enhanced the positive PR from this campaign.

What’s one advert you’ll always remember? These are only eight of hundreds!